Here, There, and (Potentially) Everywhere 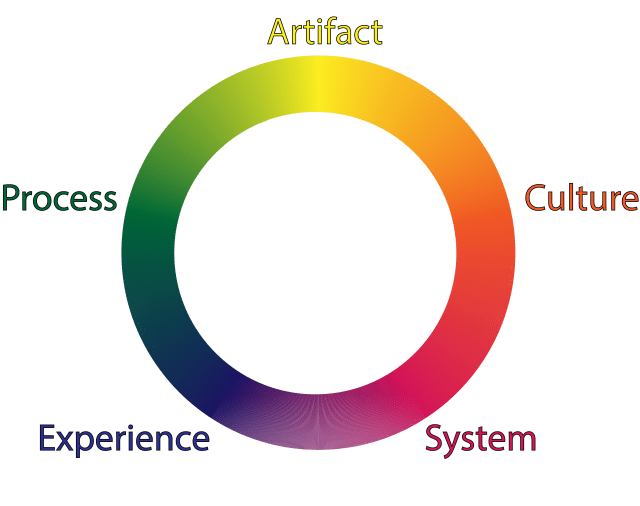 A continuum is one continuous sequence in which adjacent (or closely located) elements are not perceptibly different from each other, but the extremes are quite distinct. In other words, if someone were to move from point A to point B of a continuum, they might not notice a change between these points, but if they were to move from point A to point E, the difference could be staggering. Similarly, if one can imagine a continuum which has as its adjacent points each of the discourses discussed in this website, the result might be a straight line. The problem with envisioning this continuum as a straight line is that there might be an implied hierarchy or a finale to the continuum as well as communicating that the “endpoints” never meet. For this reason, the continuum I like to envision is circular as opposed to straight.

In addition to emphasizing that there are no hard divides or borders between these levels, this circular alternative also communicates that there are no points where things necessarily “begin” nor “end”. Instead, there are things that can fall within the unambiguous areas (where something is definitely an artifact, for example) while other things might fall in the ambiguous areas (where something can be both an experience and a process, for example), all the while being able to loop the whole way around across each discourse. In this representation, I use colors to communicate how there are areas that are distinctly one thing, such as where an artifact is distinctly yellow, and areas that are between two discourses, such as where the color lime comes about by being a mixture of green (processes) and yellow (artifact). These ambiguous areas are made up of both, yet are not wholly one or the other.

With this representation of a continuum, the different shades of colors communicate that there may not be hard barriers between each of the discourses but instead there are ambiguous (or fusion) spaces–spaces where features from more than one discourse may be present. The circular representation communicates that the discourses have no set beginning or endpoint. Taken as a whole, I use this illustration to make a case for how design, in regards to how we are talking about it in this website, can be here, there, and everywhere at any point in this kind of continuum, potentially manifested as a number of different things.