When we think of casual workwear, we might think of hoodie-wearing CEOs, khaki pants, and jeans on casual Fridays. We might even have experience with “Hawaiian Shirt Friday,” the epitome of casual Friday in the United States. The Aloha (or “Hawaiian,” as mainland United States citizens often call them) shirt has deep roots in the history and culture of Hawaii. It has transcended generations and firmly planted itself in everyday life on the island. It even played a role in the worldwide shift towards more comfortable office clothing. In order to understand the power of the Aloha shirt, we must first take a look at the history of Hawaii and what lead to the Aloha shirt.1 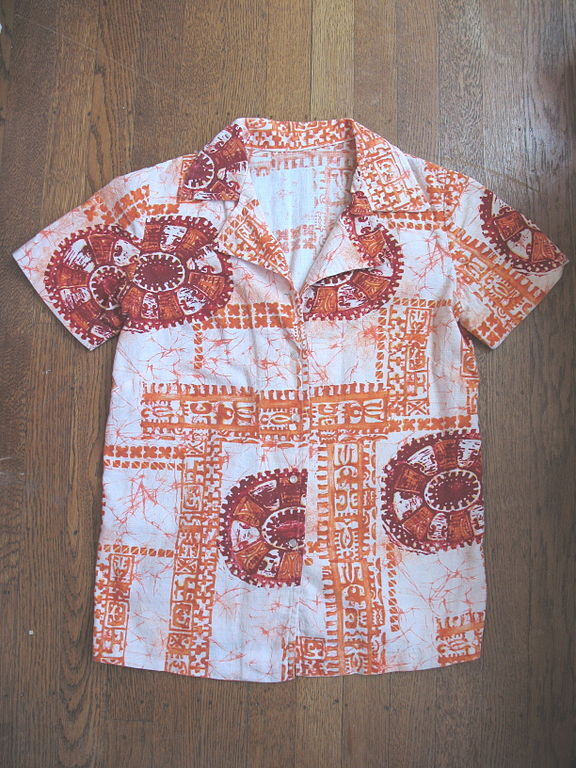 Hawaii can trace its earliest inhabitants back to around the year 300 CE, with other waves of Polynesian travelers arriving some seven hundred to eight hundred years later. The island’s biodiversity and natural resources supported a vigorous population of about one million people by the time the first Europeans arrived. Realizing the potential of this land, Europeans settlers quickly moved in and set up sugar plantations. The size of these plantations however, required workers that the island’s population couldn’t provide. Therefore, the Europeans recruited workers from elsewhere. Workers arrived from all over the world, including Asia, the Americas, and even as far off as Portugal. By 1924, about 40% of field workers in Hawaii were from Japan.

Japanese immigrants brought traditional Japanese fabric known as Kimono fabric to Hawaii. The fabric was widely used in Japan for traditional garments, however Hawaiians used the fabric for western-style collared T-shirts. The new shirts were fun and popular among the youth. By 1936, local manufacturers had fabric custom-made with Hawaiian and tropical motifs. The shirts were originally sold as souvenirs marketed to tourists. However, during World War II, Aloha shirts became a symbol of allegiance to Hawaii and America. When Mitsuru Doi, who was the first Japanese American to join the Army in 1943, left for his swearing-in ceremony, he was wearing an Aloha shirt with the Hawaiian Islands pictured on it. Soon many Japanese-American citizens of Hawaii began wearing similar Aloha shirts to show their pride in Hawaii. The Aloha shirt transformed from a tourist item to symbol of pride and identity in the Hawaiian population.

After the war, US nationalism and patriotism soared. The US, as a whole, experienced a postwar boom in the economy. During this time, most of the office workers or businessmen in Hawaii dressed very similar to the style of the American mainland, wearing suits, jackets, ties, and pocket squares. Although worn to signify dignity and prestige, suits and jackets were not very practical for summer on a tropical island. A new lobbying group, the Hawaiian Fashion Guild, launched Operation Liberation in 1962. Operation Liberation was a campaign to get men to wear Aloha attire during the summer months. The Hawaiian Fashion Guild, a group of Aloha shirt designers and manufactures, gave every state representative and senator two Aloha shirts and convinced them to wear local Aloha attire on Fridays. Hawaiian lawmakers officially created Aloha Fridays in 1967.

Today, many Hawaiians wear Aloha shirts daily including at special occasions such as funerals or weddings. The shirts, however, are more than just practical and fun to wear. Hawaii has a high prevalence of interracial marriage and many families do not look alike. Families often wear matching Aloha shirts during family celebrations such as baby luaus, graduations, or hula performances, displaying family unity through clothing rather than skin color. Furthermore, the prints of local Hawaiians’ shirts differ from vacation wear prints. Local prints include representations of the island’s beauty. Every image seen on a true Aloha shirt is found on the island, from native fish, flowers, and even the Polynesian breadfruit plant. This gives a sense of identity to the locals and a pride for their homeland.

The Aloha shirt is a multi-ethnic shirt, blended from Asian, Polynesian, Hawaiian, and American cultures. It is a powerful artifact: it reflects the blending of many cultures into one Hawaiian people. This shirt supplanted formal western business wear, itself culturally embedded as a sign of power, respect, and class. The Aloha shirt is not only more comfortable to wear in the hot and humid pacific island climate, it is a symbol of the Hawaiian people and culture. Thus, it not only allows self-expression, unity, and comfort, but also embodies Hawaiian culture.